I honestly thought I was the only person who cared about this, but there seems to be quite a lot of interest in maps set before the Resonance Cascade, featuring Black Mesa in an explorable and working state. Therefore, I have decided to remake Office Complex as it was the morning before the Resonance Cascade, complete with expanded areas behind what used to be locked doors.

All three maps have been restored, and are currently being updated to work on the new Xengine Update build. The original Map A and a revised Map B are now updated; work will continue on updating Map C and expanding Map A. Check the tail of the thread for the most recent updates.

Help Wanted[/size]
[/size]Currently, I have no way of adding custom scripted scenes or NPCs into the game short of editing the BM VPKs themselves- the custom VPK system seems pretty limited right now, and I would like for this to change at some point, as that would allow a lot more “life” from the facility’s inhabitants than the one-action animations they are doing currently. This also results in “pre-disaster” scientists and security guards occasionally appearing bloody, and the npc_human_security “office workers” wearing full armor- these issues will have to wait for the Black Mesa developers to make adjustments on their end, so please don’t repeatedly post about them.

Additionally, I would like at some point to record some custom dialogue- I have a terrible voice for VA (if the scripted sequences come out soon, you may hear me in placeholder sound files), and am wondering who recorded voices for the Uncut, Uplink, and Hazard Course mods.

Media[/size]
These have to go as links because they can overrun the character count:
Map A
Map B
Map C - OUT OF DATE

[/size]Credits[/size]
[/size]Thanks to Citizen[五] for coming up with a solution to the “sticky” character manifest bug.

I also think a special shout-out should go to the developers, for releasing map sources as quickly as they did and generally being very supportive of the mod community.

Looking good, it’ll be nice to see the two separate depiction of pre-disaster Black Mesa. Can we expect more interesting scenarios and scenes like the med emergency? This type of stuff happening can make the facility seem more alive (ironically).

Oh, and a tip for the lighting, experiment w/ linear/constant/quadratic lighting, and toy around with a tonemap ent until you get your bloom looking good.

Personally, I wouldn’t have the scattered-papers decal on the floors or other post-disaster messes. I understand them there for after the disaster, but a working facility would have someone around to clean up any messes left and the people would use the trash cans if they are provided.

I think the scientist dropped the map with papers

Looking good. I’d be very interested to see what you can do with the labs in Questionable Ethics, I like how the Black Mesa devs redid them.

Can we expect more interesting scenarios and scenes like the med emergency? This type of stuff happening can make the facility seem more alive (ironically).

If I can get custom LCSs working (and possibly voices as well), I plan to have many different Anomalous-Materials-style vignettes throughout the complex, as well as a proper actbusy system where scientists actually move around and work on things as opposed to just sitting in one place.

Oh, and a tip for the lighting, experiment w/ linear/constant/quadratic lighting, and toy around with a tonemap ent until you get your bloom looking good.

Well, the tonemap for this level is already .2 units lower than normal (relative to Anomalous Materials) and some of the lights have bloom scales down in the .3s, but I’ll make it work. Those drop-ceiling textures don’t seem to like to show up very bright.

Personally, I wouldn’t have the scattered-papers decal on the floors or other post-disaster messes. I understand them there for after the disaster, but a working facility would have someone around to clean up any messes left and the people would use the trash cans if they are provided.

I cleaned up most of them and put more papers on the desks, but people are messy and so sometimes there are a few places with scattered papers around trash cans, under desks, etc. In this particular case, he very much did drop the documents- if you look closely you can see a brown stain and an overturned coffee cup. I suppose someone might have had the presence of mind to scoop up his important documents for him, but they all seem pretty busy gawking at the guy potentially dying.

I’m referring to the last picture (of the hall with the trash can).

So in fact u are building a RPG?

So in fact u are building a RPG?

At the moment, the map is just a walking tour of the pre-disaster facility. I was considering adding some kind of story to it, but thought such would be too hokey- if people want something like that, however, I would definitely consider it.

I don’t think he said anything about roleplay, and you already play as a scientist in base BM.

Those drop-ceiling textures don’t seem to like to show up very bright.

Have you already tried using a separate light_spot to illuminate it?

I don’t think he said anything about roleplay, and you already play as a scientist in base BM.

Those drop-ceiling textures don’t seem to like to show up very bright.

Have you already tried using a separate light_spot to illuminate it?

Yeah, that resulted in an awful-looking “rim” effect on the walls, but thus far I’ve been having good results with phantom lights up near the ceiling with HDR turned down really low.

The second floor of Office Complex has been released! Workshop link is here.

It’s also time to decide which parts of Black Mesa are going to get the pre-disaster treatment once Office Complex has been taken care of: I will welcome comments in that area here or on the workshop page, but here are my initial thoughts. Currently, I am thinking the way this will be done is by assigning maps a “priority”- that is the order I will be doing them in, and I will get as far down the list as time and other concerns permit.

I’m also considering ways to connect the different areas, such as by tram line or elevator, and would like thoughts.

Originally, Office Complex was going to have an entirely separate system of stairwells for the personnel who worked there, since I thought the original stairs were too rough and “maintenancey” for that purpose. However, with a lot of additional blue-white lighting, they worked out quite well. 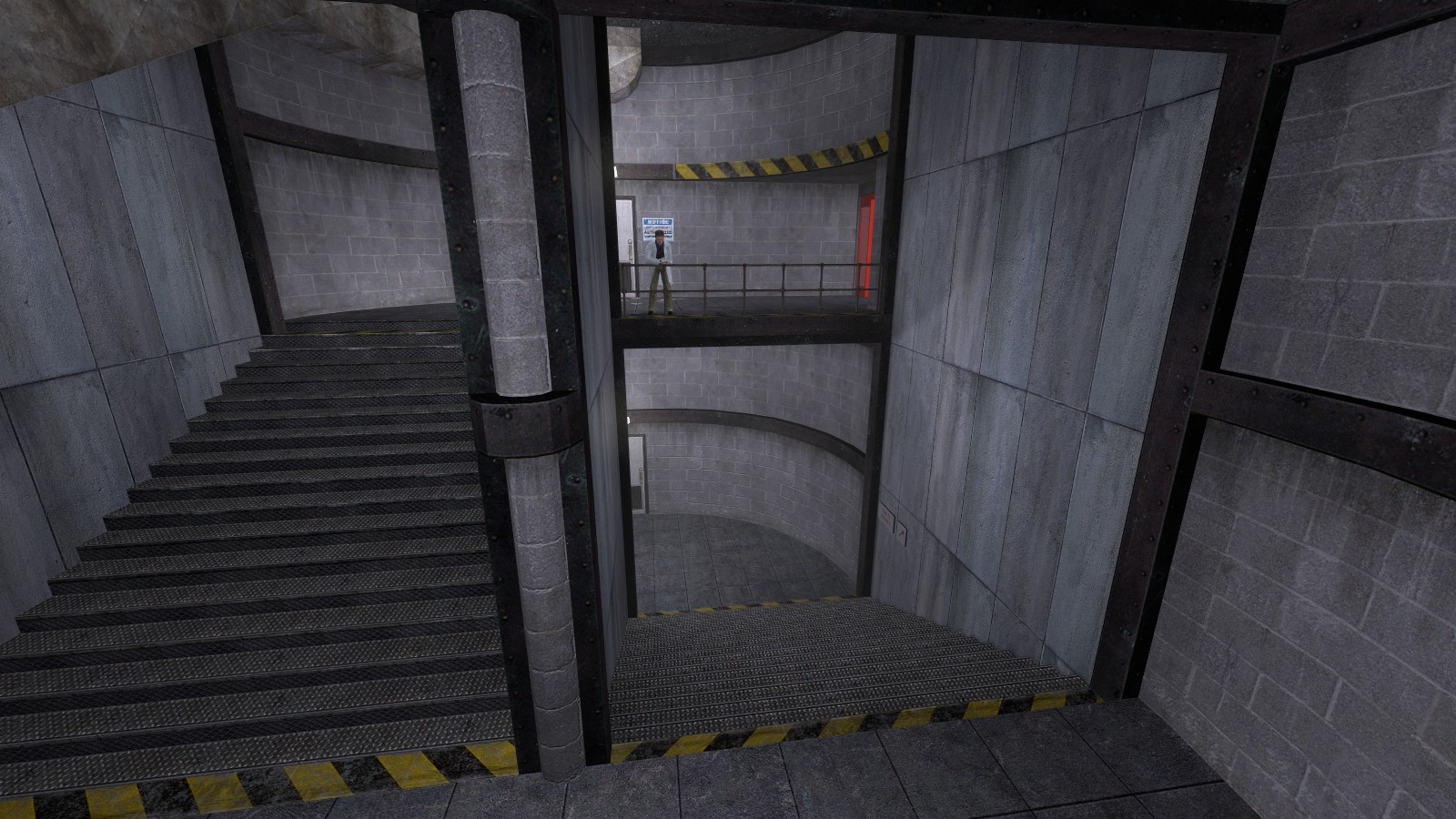 I wound up expanding the rear of this floor a lot more than the front section, simply because the corridors that lead off from it didn’t point directly towards already-filled-in areas of the complex. That area also has kind of its own visual style that isn’t quite like that of the main player-traversable area. 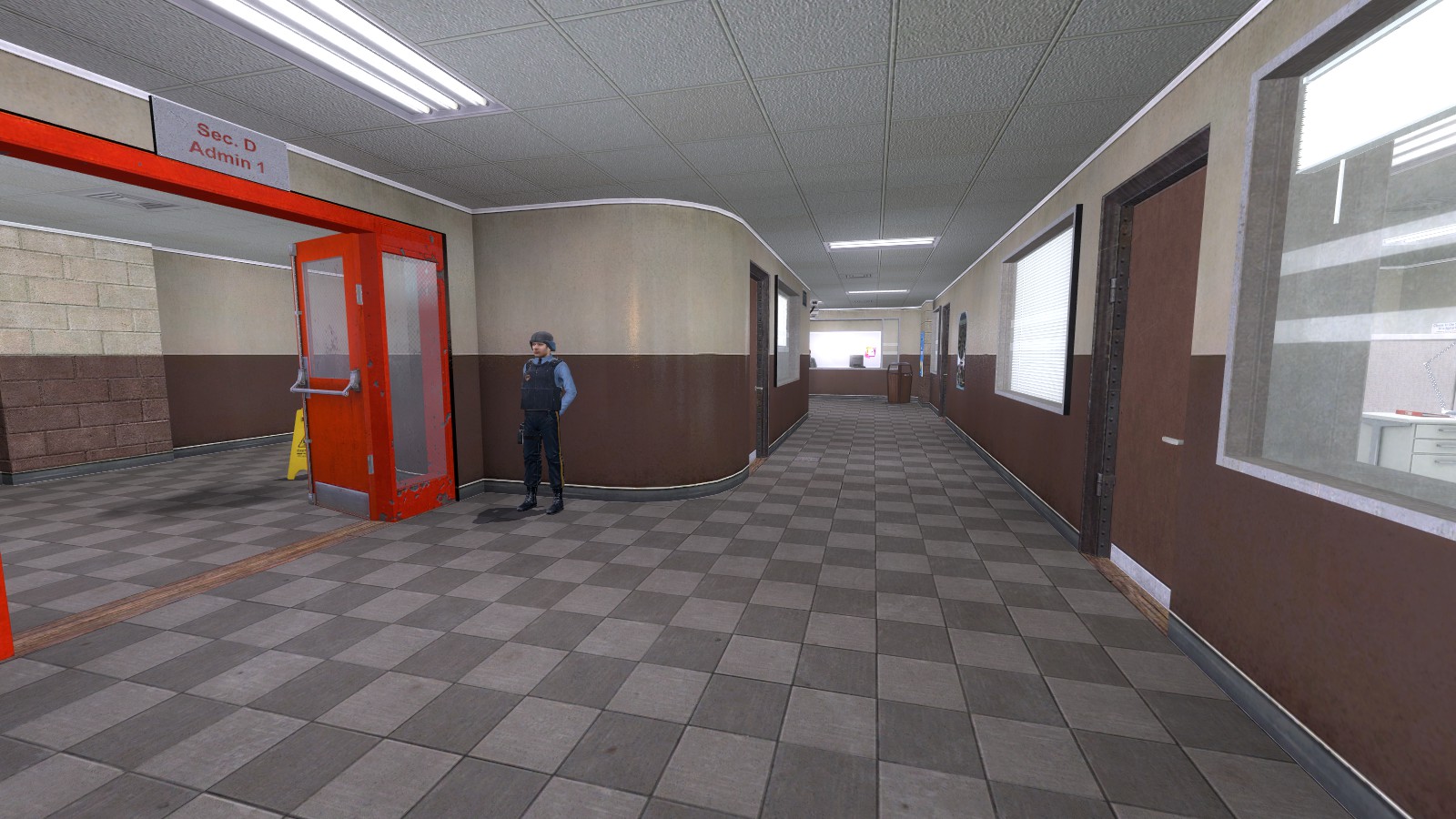 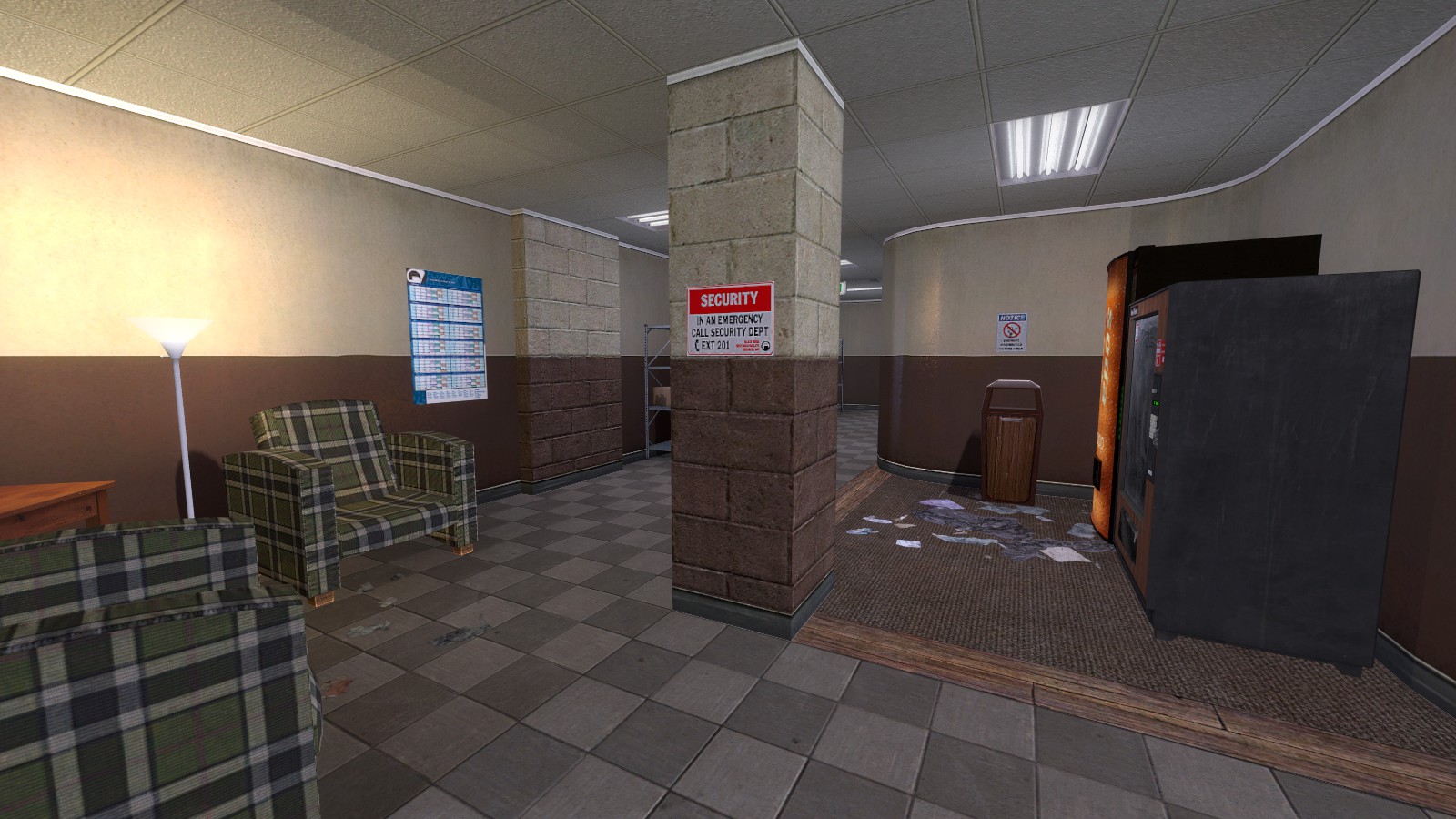 c1a2b contains very few maintenance-related areas, especially compared to c1a2a which is like half maintenance. If it was fully accessible to the player, the middle one would lead into the first map of Black Mesa Inbound (since if you put the maps together they end up in approximately the same place). 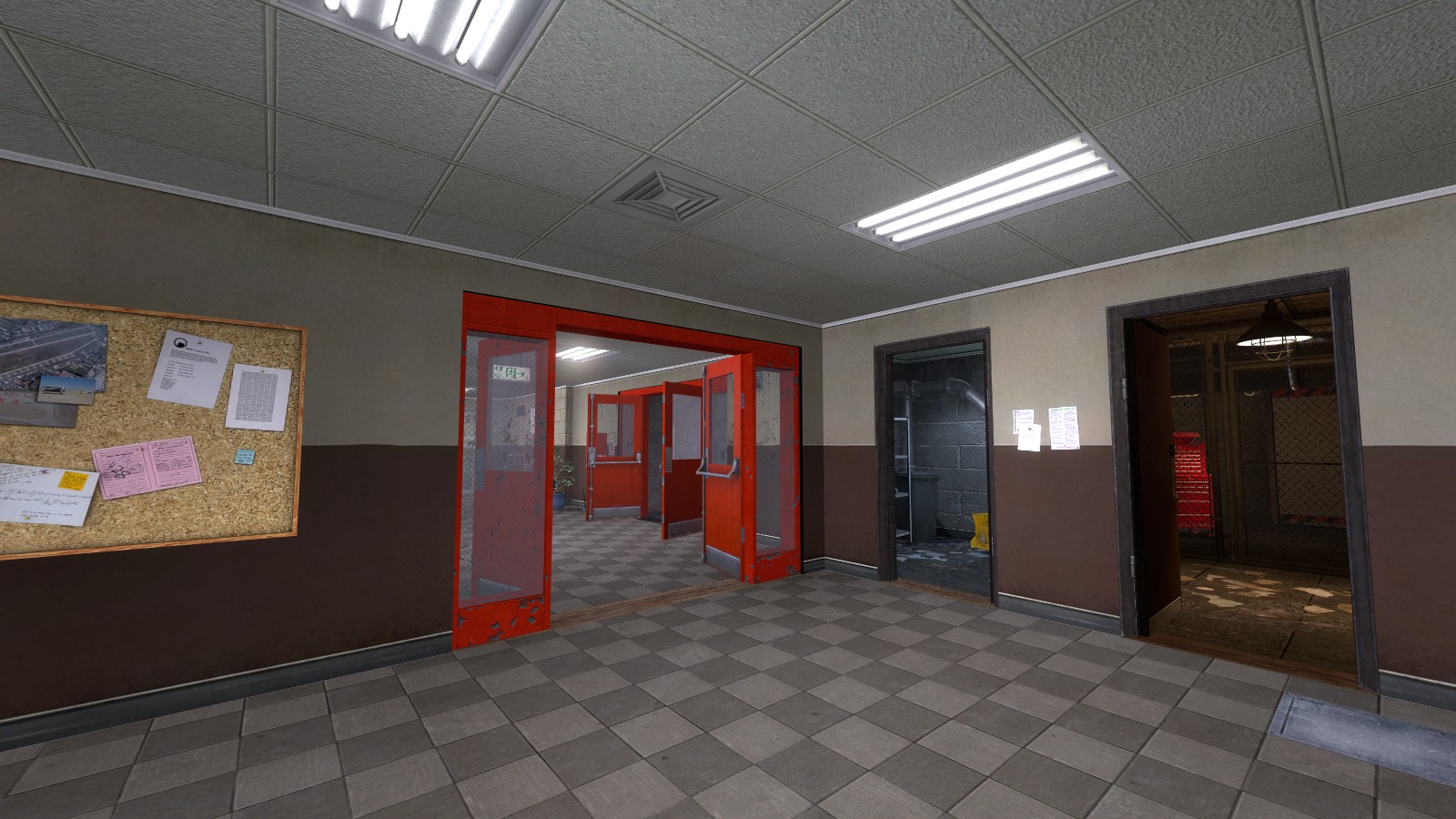 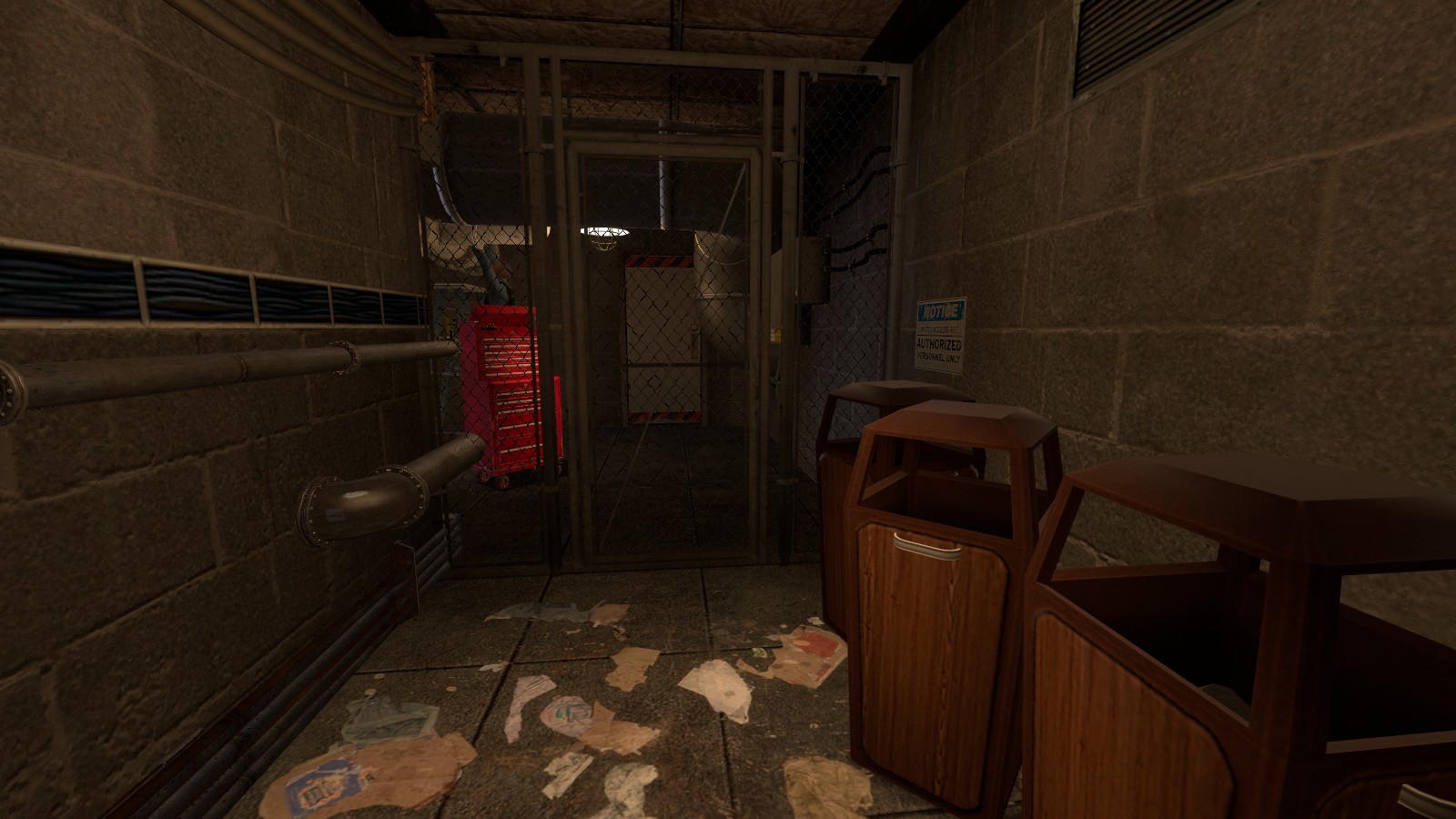 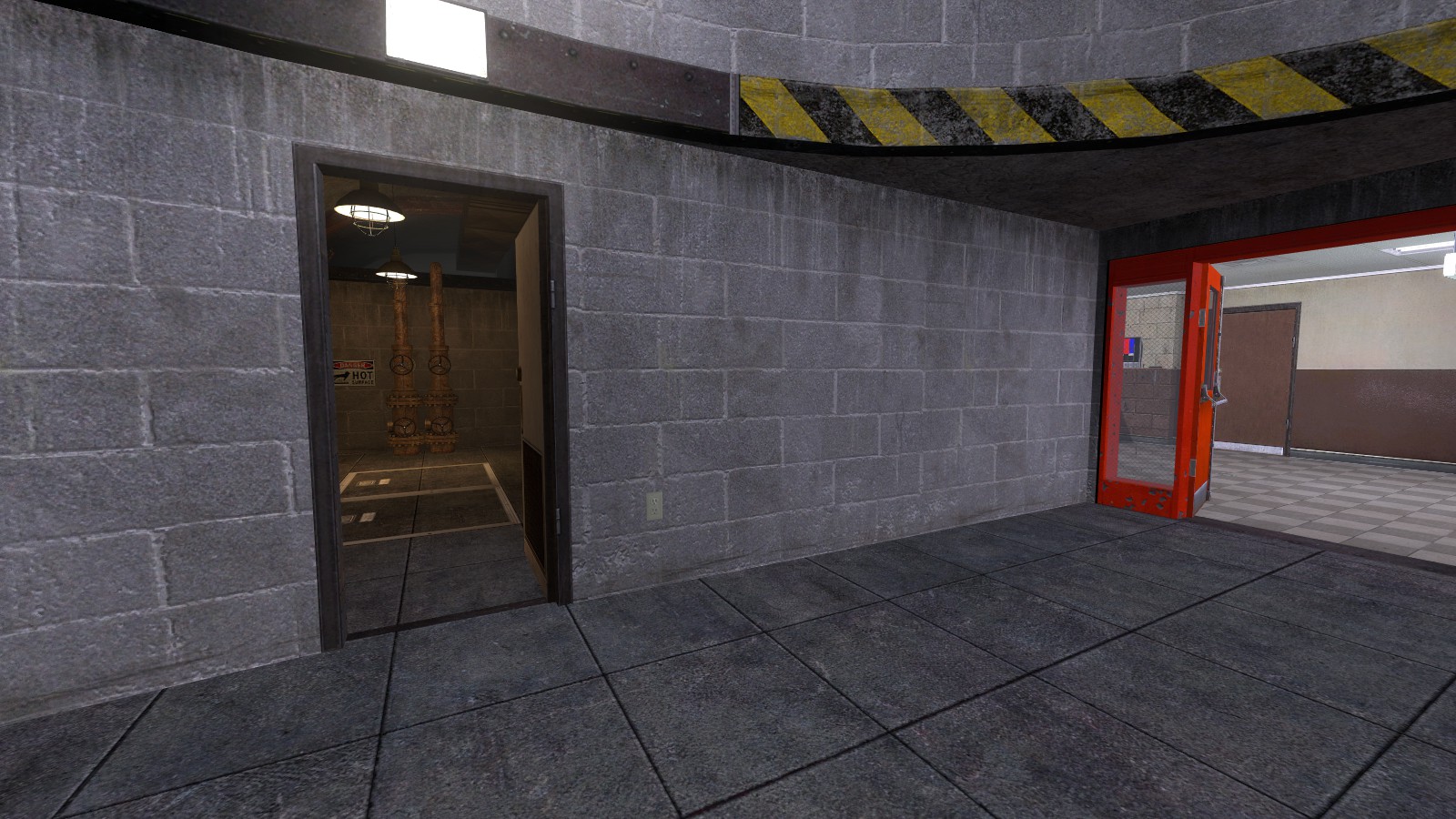 We come now to the issue of elevators: I am planning to have working ones that can take the player to any of the three mapped floors of Office Complex (possibly four, depending on how much of the cafeteria balcony I fill in). However, the way the elevators are currently set up is a bit odd.

Office Complex has at least two elevators in it, as we can see from the map c1a2b: one near each stairwell. I’ll call them East and West.

Now, there’s also the elevator the player takes up from the canals at the start of the level, which stalls at c1a1a’s floor. When I overlayed the maps in Hammer, it didn’t exactly line up with East, but the two elevators literally share a wall so I am thinking they are the same (the developers obviously put more thought into inter-map continuity than the original Half-Life mappers, but areas don’t always perfectly match up and sometimes overlap each other- in particular, if the Office Complex stairwells on the same side of the map are supposed to occupy the same plane, they, well, don’t).

There is no evidence of the West elevator in bm_c1a2a, but it does end up in the area back behind the freight lift that I am planning to expand in pd_c1a2a, so I am assuming it goes down there as well (and possibly to a different section of the canals too). Since I will be the one adding that elevator, unless there’s something else that I really want to put in that exact spot the one on c1a2b will match perfectly with it.

The East elevator is extant in c1a2c’s first floor as well (it’s in the lobby area immediately after the stairwell), and since East’s shaft is the one you travel through to get the Permeable Infrastructure achievement, the positions in c1a2b and c1a2c match perfectly. The second floor (with the cafeteria balcony) is very small and I don’t intend to expand it into a full map for semi-obvious reasons of feature creep, but I’m sure there’s a way to get to East up there too.

However. When I compare the West elevator shaft you climb at the very end of the level with the West shaft as it exists in c1a2b, I find that they are a substantial ways apart- not on opposite sides of the map or anything like that, but they are pretty much across the c1a2a stairwell from each other. So I have no idea if they are supposed to be connected or not- I could see there being a separate elevator that connects to the High-Security Storage facility, but since Office Complex is a lot taller than just the three maps we explore, shouldn’t that be someplace other than Admin 3?

So, ultimately, here is where we stand:

Awesome, I was always asking myself the same question, how did it look like before accident. Keep it up

The third floor, when it’s done, is going to be pretty large and may actually be split into two maps. The first is currently tabled, but there isn’t too much keeping me from getting back to it other than that I want to get the third done.

While I work on some very special areas in c1a2c (absolutely huge map, by the way, may have it split into two maps before this is all over and done with), have some WIP media from c1a1a:

If I can get custom scripts and better VA working (not there yet, but getting closer), the maintenance guy and the scientist will have a little argument over the latter’s upending of the water cooler. 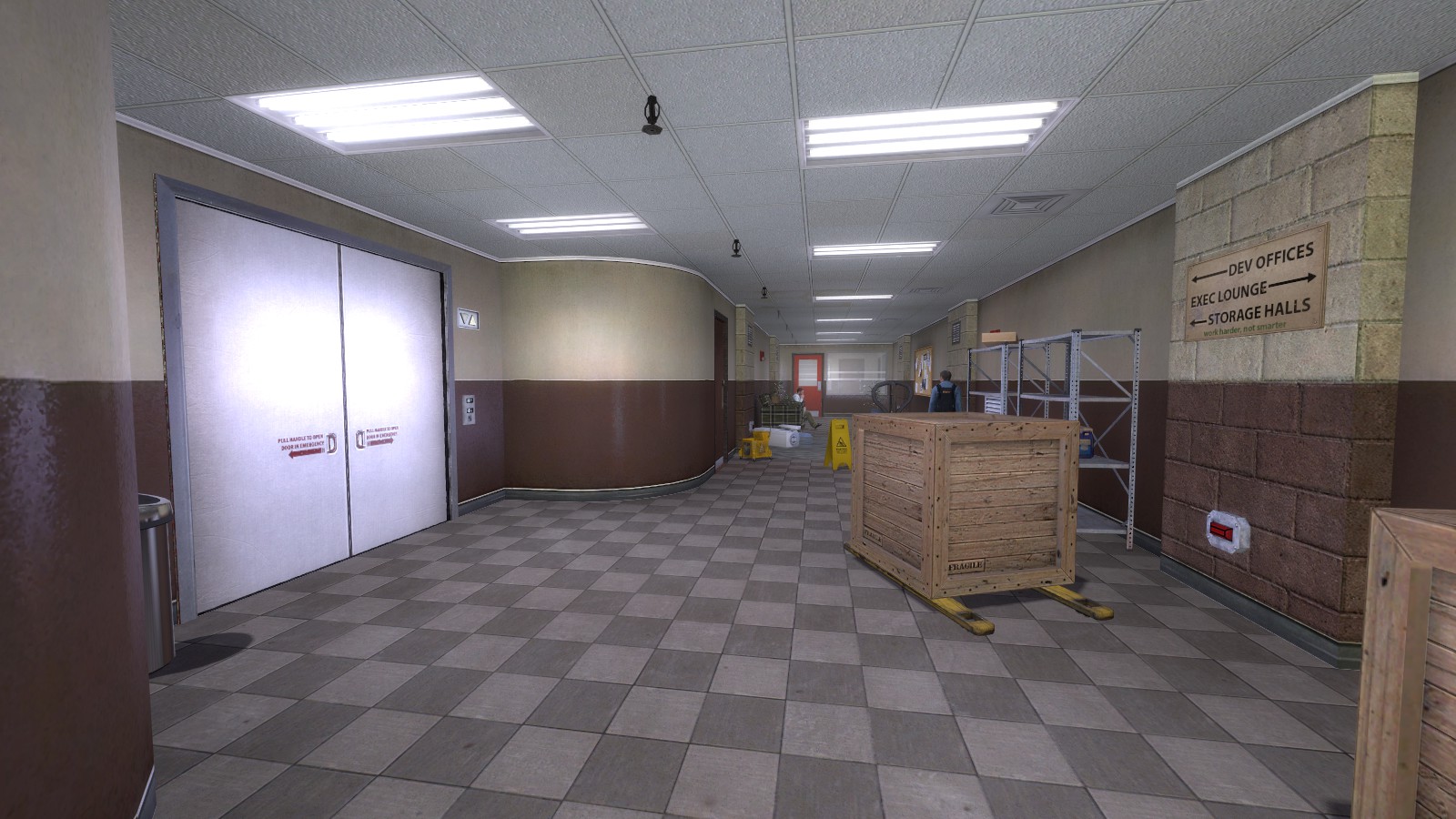 I think that as it currently is, this area looks a little bit too dim. 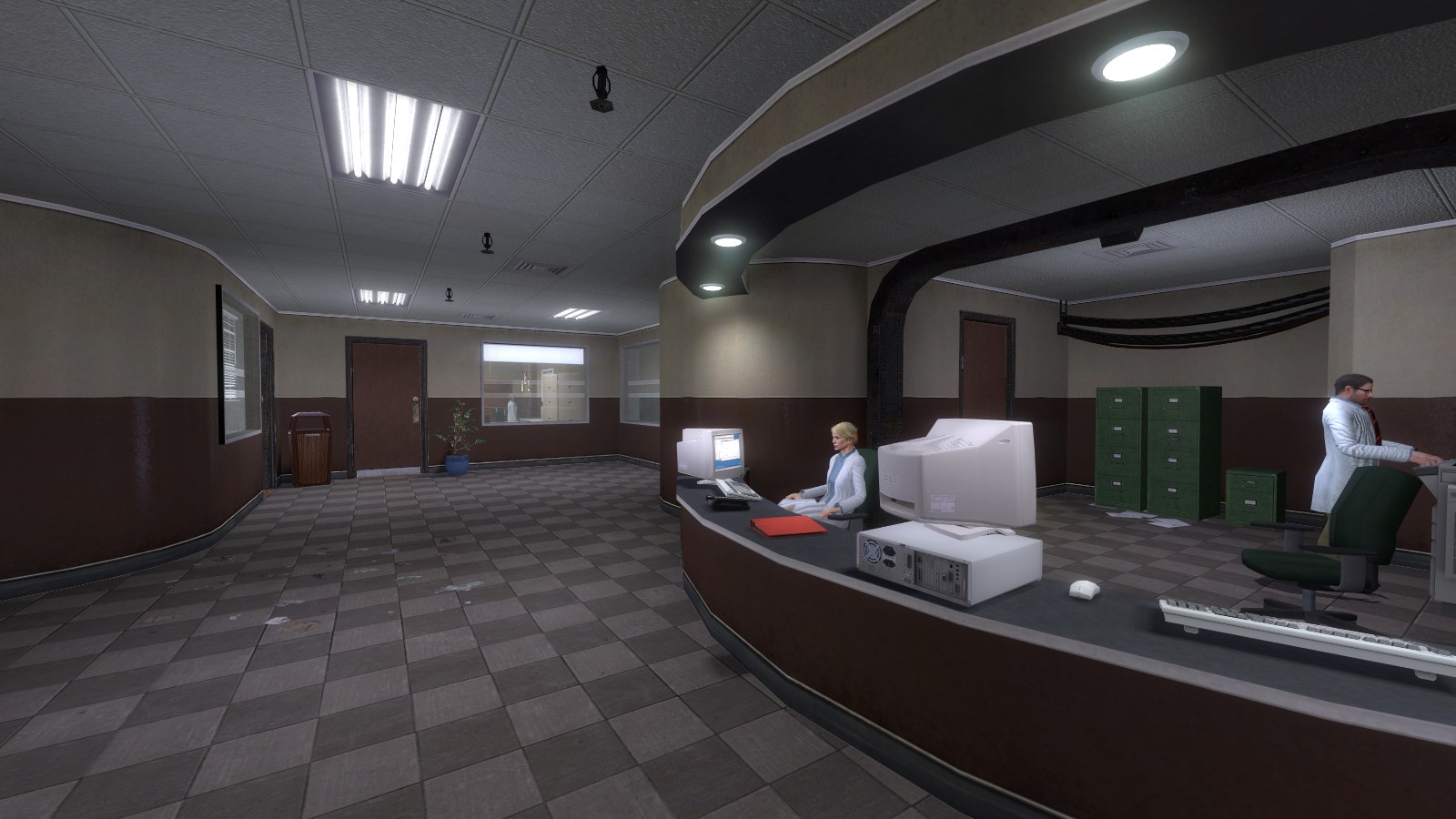 “Gordon, do I barge into your office unannounced and proceed to wreak havoc?” 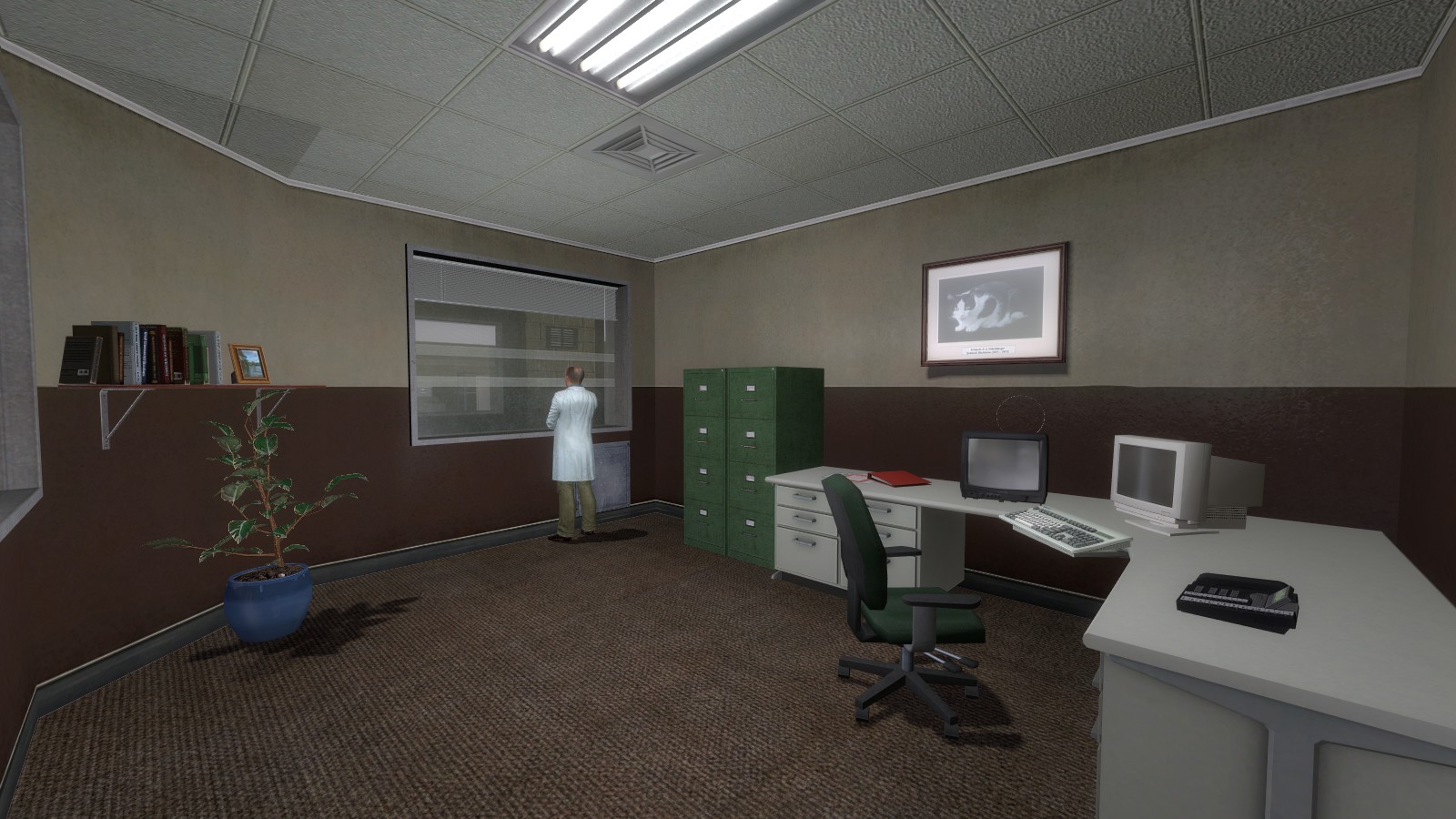 I’m sure that’s just a small leak, no reason to worry… 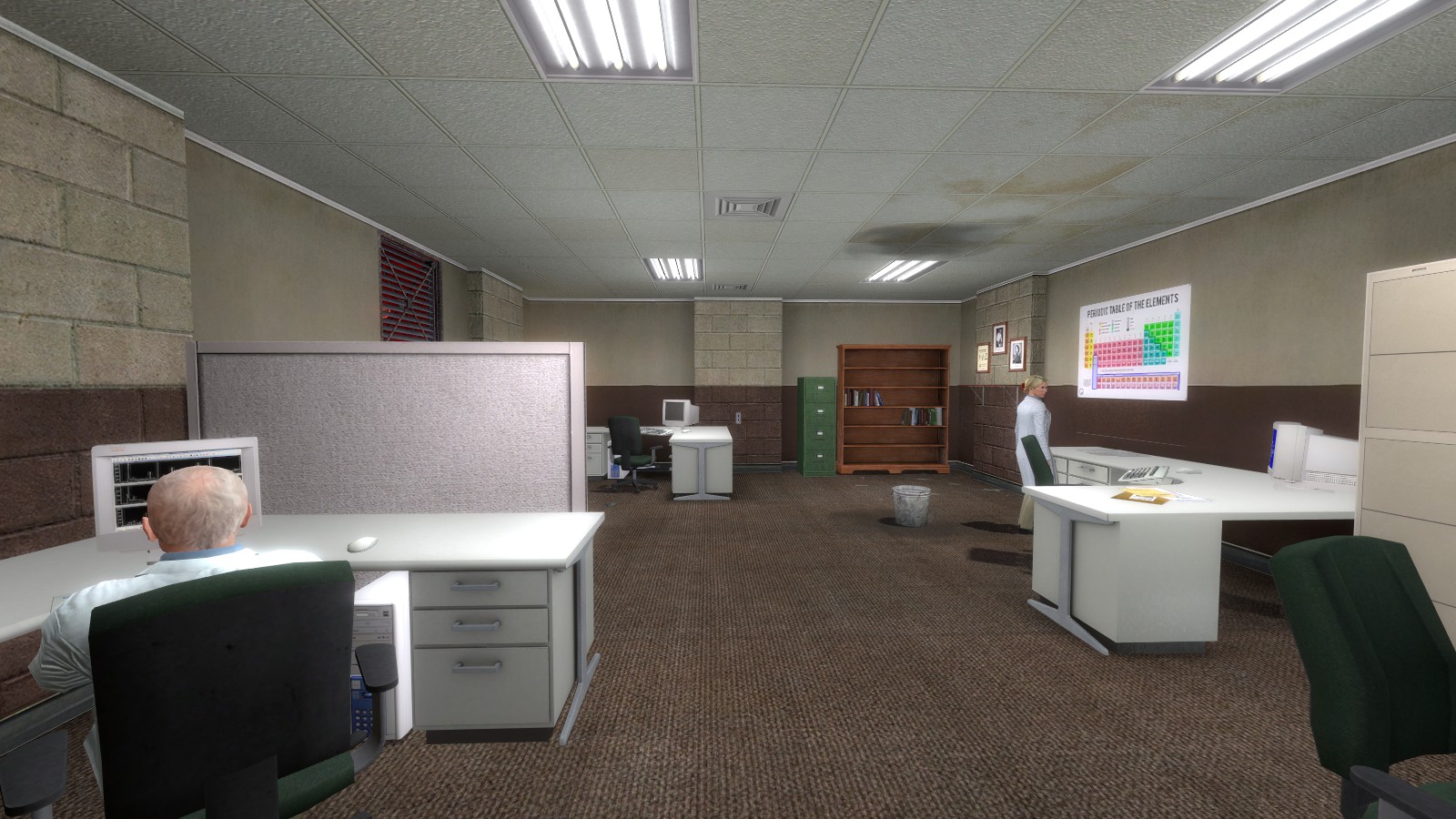 I still think the lighting isn’t quite blue enough in the offices, even though the values are identical to those in map b. Looking into colorcorrect, etc. 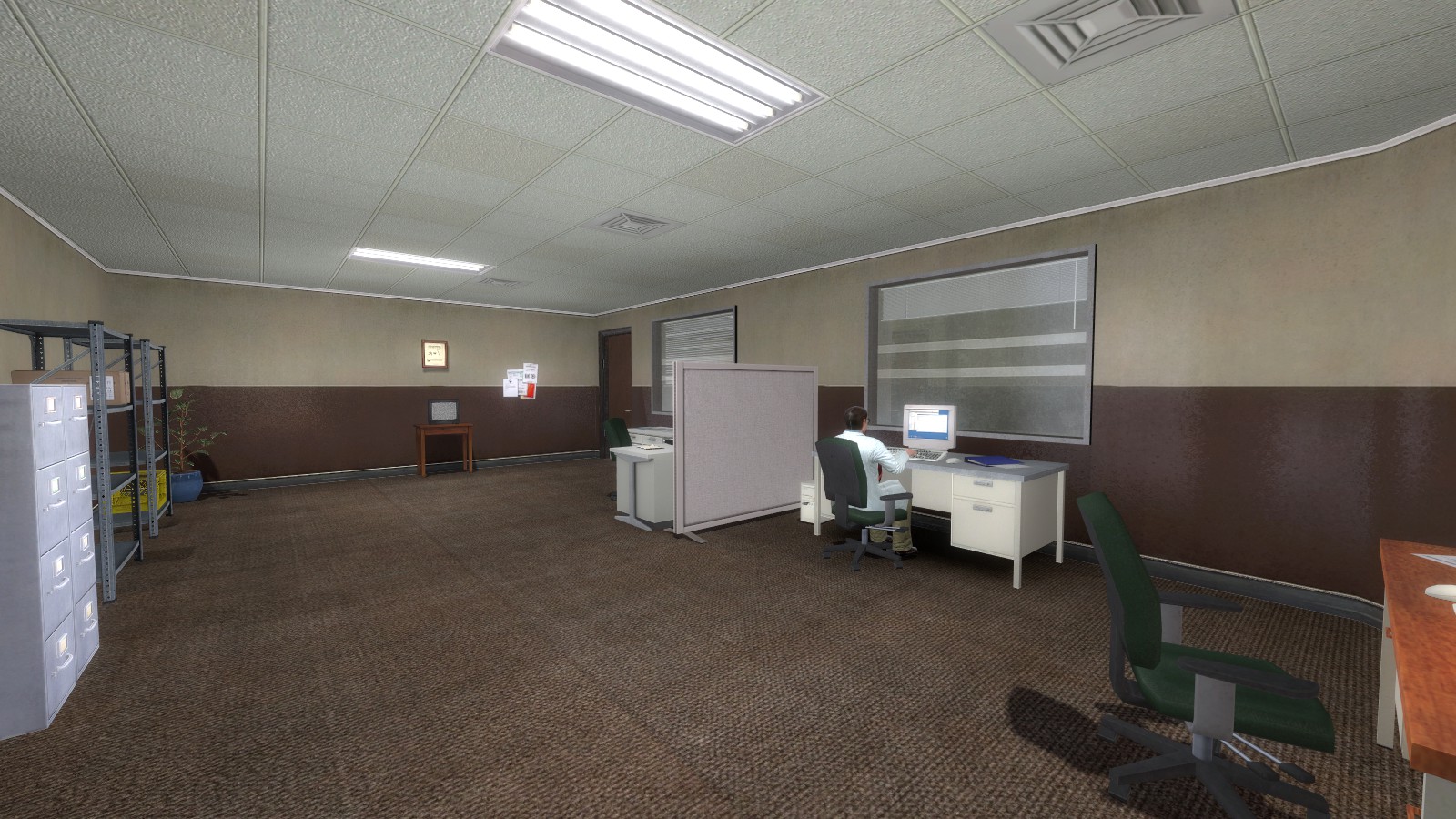 I wanted to have G-Man on the TV in the break room, but the monitor brush didn’t fit well with the position of the screen. 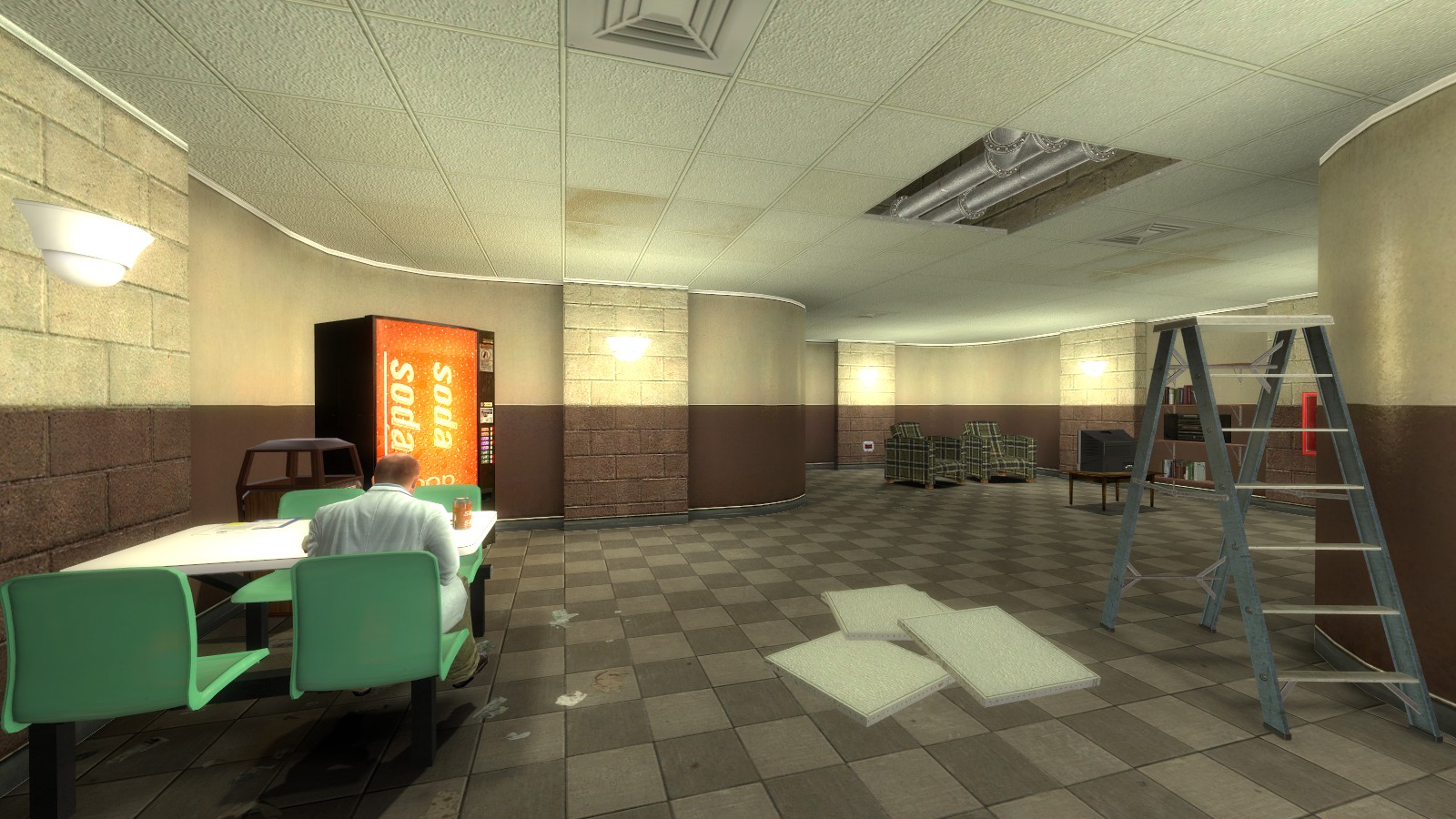 These are all awesome, but I think (as others have mentioned before) you’re a little too liberal with the litter/mess decals on the floor everywhere. It feels a bit unrealistic for a professional workplace that surely has janitorial/cleaning staff.