I managed to convert the maps of the free version into object files so I could stitch them together in Blender. I found out that a lot of the maps overlap each other. For instance, in the attached picture, the foreground is the warehouse in We’ve Got Hostiles. The lumpy blue thing running through the yard is one of the tram tunnels from Inbound. 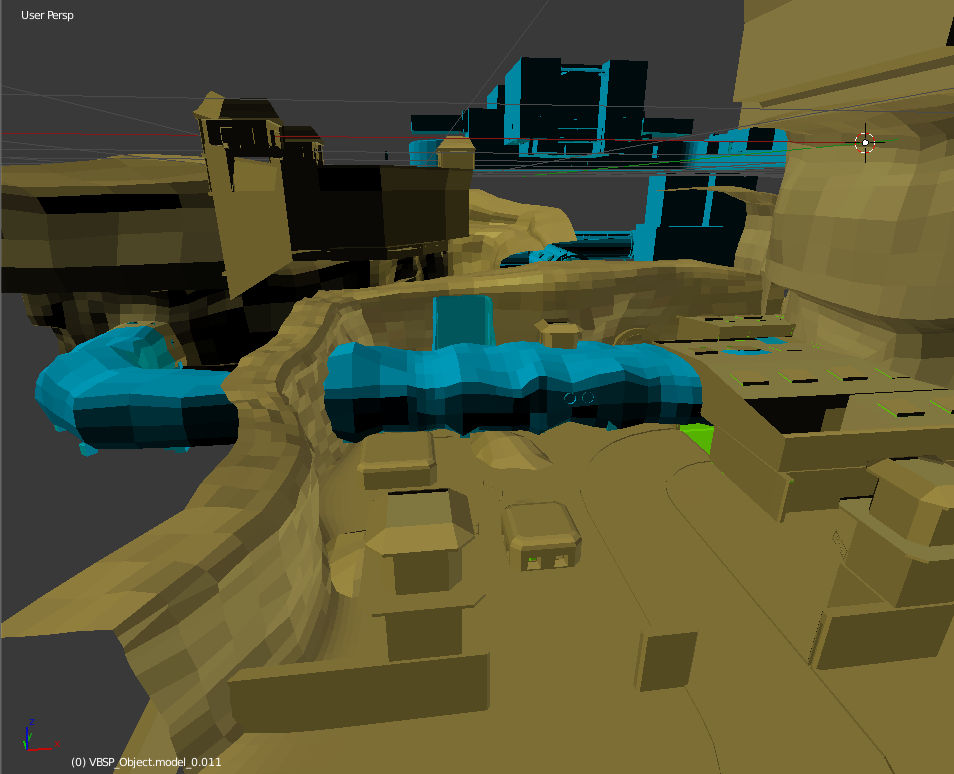 Black Mesa overlap.jpg954×774 89.3 KB
Now, maybe this has already been fixed for the paid version or maybe the developers don’t want to bother. Just thought I should bring it to someone’s attention. I thought of trying to rework the maps myself, but I haven’t a clue how to do that and I’d probably break something.

(For those wondering why I bothered importing the maps to Blender, I just wanted to build a map of the facility so I could fill in some of the gaps for my own story writing.)

Everyone’s well aware of this, no one really cares 'cause it’s not something anyone will notice while playing, which is the important part.

Don’t mean to come across as a jerk, just pointing it out.

I’d be interested in your posting additional materials relating to this project, as a 100%-accurate three-dimensional model of the entire facility would be extremely interesting to have.

I’ve got a question. How big of a map can the game run fine?
I mean could you play the entire mod with loading one map?

Depends on what you mean “how big of a map”. Most of the BMS maps already hit the upper end of one Source limit or the other - whether it’s the BSP limit, displacement limit, entity limit, light limit, texture limit, etc.

The biggest possible size a single map can be is 32768 x 32768 x 32768 units, which is around 840m x 840m x 840m. Less than a square/cubic km. Realistically, if you want any proper detail/stuff in that map, you probably won’t even take up half the grid. Even the biggest BMS maps only take up around half the grid - even the Xen ones!

Black Mesa probably already has the smallest number of maps possible within the limits of the Source engine. You may be able to cut it down with some merging and optimising but it would likely not be worth the effort. It would absolutely not be possible to have BMS in one big map. It would probably be tricky to even combine any 2 BMS maps together (let alone 40+), because of the engine limits! That would require either map streaming or a total engine rewrite.

I know that theoretically a “built-from-scratch” engine could be tuned to handle one huge map.
God of War aims for the same thing in their newest edition.

Take me as a fool, because i don’t know this, but when the game loads a map, it pushes all the needed data into RAM, yes?
So as long your RAM has the space, you could have a game in one single load?

I’d be interested in your posting additional materials relating to this project, as a 100%-accurate three-dimensional model of the entire facility would be extremely interesting to have.

“Materials” might be putting it a bit strongly. Mostly I’ve got obj files and one Blender file that I’m trying to put them all into. Not all of the maps connect directly to the next, so it’s a little tough getting things 100% accurate. And then there’s the whole overlapping thing. I guess some of it could be explained by spacial distortions caused the resonance cascade, but that doesn’t explain the parts from before the cascade happens. Anyway, I’ll definitely look into uploading more images or even the finished model if anyone’s interested. I think it’d be neat to see what Black Mesa would look like as a real place.

Take me as a fool, because i don’t know this, but when the game loads a map, it pushes all the needed data into RAM, yes?So as long your RAM has the space, you could have a game in one single load?

Theoretically, yes. It’d take a while to read from disk and put into RAM, but it could be done. Of course, then every person who plays the game would require an amount of RAM equivalent to the size of the game + the overhead from the OS and any other running programs. For reference, I’m running Windows 10 and have two browser windows (total 2 tabs), steam and a couple IM clients open, and that’s taking up 3.2GB. So to hold the entirety of the current Black Mesa build (clocking in at 18.4GB on my machine with a couple workshop maps) in RAM you’d probably need 24 gigabytes of RAM to make sure you don’t run out and potentially crash your computer.
(This is why most engines have built in limits for what can be loaded at a time.)

So we can expect a slider to adjust the amount of ram the game uses. SWEET
It should be easy to add to the game because according to 99% of all posters, everything is easy to program and modify[/size][/size]. /s