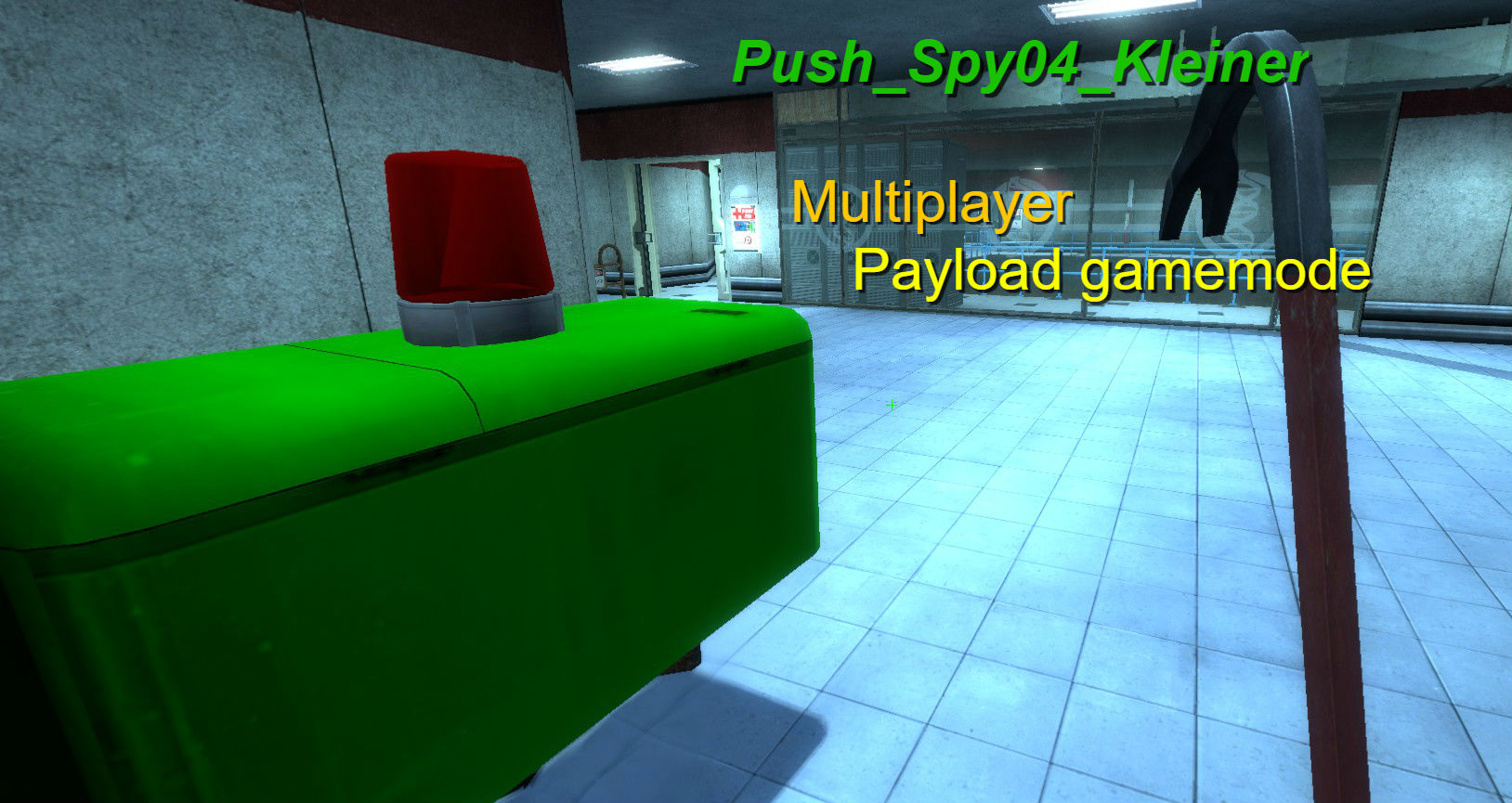 A while back someone asked if someone could create a payload / push map for Black Mesa.
Sunday to Monday I had trouble sleeping and came up with an idea for a map.
So I converted one of my spy maps into a working payload map for Black Mesa.

Marines have to push the hovering fridge bomb through the facility all while the scientists try their best to stop them.
The bomb starts moving when a marine is in the zone around it and will stop when nobody is around it.

Spawn points will be enabled and disabled throughout the map as the bomb is pushed.
The spawn points comes with different guns according to what stage of the map you’re in, beginning with weaker weapons and then moving the heavier weaponary.

If the marines successfully push the bomb to the end they will win, should the scientist prevent the marines from pushing the bomb they will instead win.
The map should be played with teams enabled.

Fraglimit has been changed so you can’t win the map with frags alone, you have to keep the bomb moving (or not, if you’re a scientist).
Map should be playable with all player numbers, but the more the merrier.

Upload tool is bugging out, but managed to upload it to the workshop. But it comes without a preview image.

Marines have to push the hovering fridge bomb through the facility

Does the bomb speed increase if more marines are around? And can scientists break movement when near the bomb?

No it’s set to a fixed speed, so you only need 1 marine near it and can keep the rest of the people running around and shooting.
The scientists can stop the bomb from moving if they kill the marines near it

But no, they can’t stop it if they’re in the zone near it.

So now I need someone to get this on a server

Does anyone know a server admin?

Gave it a little test, it looks cool and it is quite huge. Got also few suggestions:

There are lot of loose object that should be fixed, because in intesive fight, it will be scattered around and it will badly obstruct player’s movement.

Some rooms are too dark where objects are completely black and it is quite hard to see anything in there. It could use some small lights or at least red emergency lightning.

Is it possible in map to place health dispenser function into bomb? Because defending scientists probably have tactical advantage + access to better weaponry.

Thanks for the feedback.
Yeah I will make some physics object into debris or remove them.
I’ll add some lighting too.

Players in multiplayer can’t pickup anything, so can’t do anything with that. The scientists do have some satchel and tripmines scattered around the map that they can place however.

I probably could add a health dispenser, but most of the spawns are relatively close to the cart and most playerspawns come with a varied weaponary so sometimes the marines are going to have better weaponary.
Also I reduced the spawning time to 5 seconds instead of the usual 10, so will have to playtest a bit to see how it works out.

Pretty sure you could set up some team specific triggers for the cart, no?

Yes I have that, only marines can push the cart.
Are the are any specific triggers you’d want or was it just a generic question?

Players in multiplayer can’t pickup anything, so can’t do anything with that.

It is possible somehow, I remember playing MP (dm_darth_town I think) map where you can pick up gun turrets and move them normally. Also satchels can be moved.

Just tested, yeah you can pickup turrets and satchels.
But no props, so it’s probably hardcoded with the props.

Interesting. Would be cool if turrets had team target logic

That is doable, but I won’t add any turrets to this map

Are the are any specific triggers you’d want or was it just a generic question?

Yeah, so that scientists in front of it would halt it and getting more marines in the trigger would speed up the movement.

Although I’d imagine this is pretty unbalanced since there’s really no role system like TF2.

But I stated that I didn’t want such a system.

If it only requires 1 guy you can have the others run freely on the map and protect it, otherwise you’re going to have a chase to stand near the cart only to get nadebombed to death, for 15 minutes.

And it’d be hard to balance it with player numbers in mind, seeing as they usually are in about 4-12 ppl. So then it’d go really slow when in a lowpop server and really fast in a medium pop server.

But I stated that I didn’t want such a system.

If it only requires 1 guy you can have the others run freely on the map and protect it, otherwise you’re going to have a chase to stand near the cart only to get nadebombed to death, for 15 minutes.

Ah, right. Haven’t had a chance to play BM:MP, every time I have a chance the servers are empty.