Hello I am new to this community and not that much familair with half-life.
I am more known to counter strike and the overlapping mapping tool Hammer SDK.
So I was wondering what the multiplayer gamemode looks like and what are the plans?
What gamemodes are there to play? and would there be room for fresh new gamemodes?
Remembering HL I can only remember (team) deathmatch is that true?
Are there any tutorials on how to implent existing (and new) gamemodes?

I was thinking about some kind of coop survival mode where you fight waves of Xenian bots with 1/2/3 other players. Each wave will increase the ammount of bots and add new/better Xenians. You will gain money on killing them that allows you to buy weapons and equipment troughout the map (and perhaps open new doors/rooms). The gamemode will contain a leaderboard that shows a ranking of highest wave you reached and perhaps highest ammount of kills/exp or money you gained.
I am not into scripting so is there like a support thing for this or people who are interesting on working on something like this? Is there also a way to playtest your map?

EDIT: here a idea I worked out and its like the CoD Black Ops zombie mode: 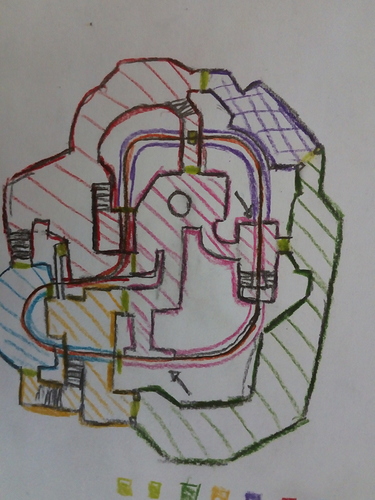 The map will consist of different areas and each area I gave a color. You will start at the pink area in the tram (with breakable windows and perhaps if possible edit the model so there is a shutter in the ceiling). The tram will make it’s way on the train track as far as possible. You will have to spend money on opening new gates and doors to reach a new area for the tram to move. Some areas are more expensive then others because of some factors like the size of the area and the equipment that can be found there. When you open one door of one area, all the doors and gates of that area open simultaneously. So you buy the area, not the specific door. The tram track is attached to the colors in the order: pink/blue/red/purple. If you open all areas the train will go in circles arround the map.

So the Xenians will spawn in waves. Each higher wave bring in more and better xenians. The Xenians will spawn in non playable area from where they can enter the map. When a new area gets opened also new spawnpoints will be triggered. I am not sure how these bots would react on a moving tram… would they be smart enough to jump on it or crawl trough the windows? Perhaps instead of the tram it got to become some kind of platform.

Troughout the map there will be standard buy spots with certain equipment and weapons (pistols, smg, shotguns, grenades, health, ammo boxes and etc). Also there will be special boxes that give a random weapon which can be a special weapon and cost more.

Instead of COOP it can also be Multiplayer with a few survivors and others are Xenians and they have like ‘x’ tickets each wave OR 50/50 and when a player dies he joins the Xenians. When the Xenians tickets run out they lose or when all survivors are dead.

A looong time ago, just after the mod was released, somebody put together a “survival” map like you describe, so I think it should be theoretically possible. Currently, there’s just deathmatch though, as in Half-Life.

That would be a nice feature to have, I’d definitely play it.
It would be nice to see co-op in the same fashion as Decay, something you COULD solo, but is fun to bring a friend.
I haven’t paid much attention though so it’s possible that a co-op thing exists or even a Decay mod.

I would be happy to voluntairy create a map that could provide this gamemode in my free time.
However I would hope to know if the dev’s are interested in this and if there is someone who can help on scripts/entity stuff. Perhaps also someone who likes to support on the enviorment art/optimisation, but it’s not a must.